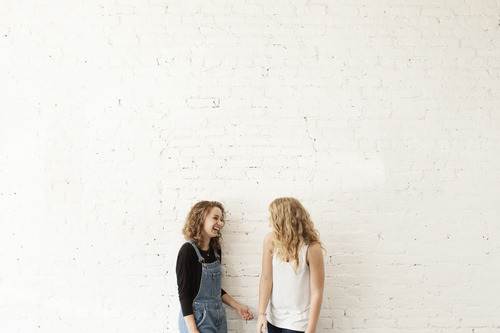 As we wrap up our study on extraordinary friendship today, you’ll see that we have come full circle.  We started our journey watching Prince Jonathan initiate friendship with a pledge of selfless love.  We witnessed that love enable Jonathan to commit, not compete and be faithful all along the way.  And today we’ll see that love establish a legacy of friendship that could transform our relationships if we will learn from it.

At this point in our narrative, while Saul is divinely detained & humiliated (I Sam. 19:22-24), David flees to the palace to get some answers from Jonathan as to why the king is hunting him down.  Here Jonathan models for us effective ways to communicate love to our friends.  Principles that we would be wise to transfer to our own friendships.  The first one we witness is that a loving friend:

Is difficult to offend.

A modern version of their conversation could have looked something like this:

Intensified emotions.  Disagreement.  Opposite perspectives on the truth.

Right here would be a ripe spot for Jonathan to take offense.  Last he knew, all the kinks were ironed out.  For crying out loud, he already stuck his neck on the line for David and everything was fine.  But now David shows up agitated, tense and demanding.  He points out that, contrary to what Jonathan presumes, he is indeed not privy to the military intelligence of the king.  And so absorbed in his own crisis, David exhibits no evident concern over Jonathan’s predicament – that this news, if true, places Jonathan in a position where he must choose between friend or father.  Again.

Jonathan could have been offended.  But he wasn’t.

The same should be true of us.  Our friends should be able to communicate frankly with us without fear of offense or incident.  Our friends should never need to “walk on eggshells”, wondering what any given encounter might bring.  While common friends may take quick offense, an extraordinary friend’s default response should be love and patient grace in the face of fault or misunderstanding.

Think about this:  If I am quick to charge my friend with an offense, I must face the ugly truth that it is not her well-being I am concerned with.  It’s mine.  If I love me, my rights are preeminent and I will demand justice if my friend transgresses them.  But if I love her, the last thing in the world I will want to do is indict her.  If we really love our friends, we will be women who are difficult to offend.

Then, out of that lavish grace flows our next point.  A loving friend:

Prioritizes being loving over being right.

We don’t know if Jonathan was fully convinced of what David was telling him, but instead of arguing his point to be proven right, (“Yes, as a matter of fact, I do know what the King does so why don’t we find him right now and get this thing settled.”), he recognizes the intensity of the emotion David is experiencing and in compassion places a priority on being loving instead.  What he says is so beautiful:

If, for the sake of our exaltation in the eyes of others we must always be right, that pride will become an altar on which we sacrifice our friendships.  We may hold our head high in intellectual victory, but she will limp away wounded and bleeding.  The model here is to swallow our pride and utter these words instead: “Tell me what you need and I’ll do it.”  A loving friend prioritizes being loving over being right.

And so Jonathan does just what David asks – he finds out his father’s intent.  When Jonathan sees it is indeed murderous, he follows the plan and communicates the imminent danger to David.  (I Sam. 20:35-42) Though David must flee quickly, the two friends steal a few minutes together to embrace, grieve their new reality, and affirm their love and commitment.  In those moments we see that a loving friend:

Here we see two brawny men of valour expressing affection, yet so many women today can barely work up the nerve to give a compliment to a close friend.  Why do we struggle so much with this?  I believe that we don’t express affection as we should because we still love ourselves more than we love our friend.   We wrestle over the potential outcomes as far as they affect us.

If I express my affection:

If this is the internal dialogue that plays in our minds, it’s a telltale sign that there is one person’s good we are primarily interested in.  Our own.  But when we truly love a friend, these inhibiting personal concerns begin to fade in light of our growing desire for her good.  If I cherish her friendship, if I’m blessed by her character, and if I delight in her presence, wouldn’t it do her good to know that?  How loving an act, to suppress our insecurities for the sake of not withholding good when it is due.  (Prov. 3:27) A loving friend openly expresses affection.

As we move to our last point, can we flash back to a scene during the first moments of David and Jonathan’s friendship?

“And Jonathan stripped himself of the robe that was on him and gave it to David, and his armor, and even his sword and his bow and his belt.” (I Sam. 18:4)

My friends who know me well would tell you I’m not a crier, but I have to confess: I have teared up many times when I read this.  It is the most breathtaking foreshadowing of what Jonathan’s selfless love will ultimately enable him to do.  In their last recorded meeting together on this earth, Jonathan proves that a loving friend:

It is important to notice that these two men weren’t simultaneously competing for a position, like an election or Mr. Universe contest, where David happens to come in first and Jonathan places second.  Don’t miss this:  The position was legally Jonathan’s.  But he stepped aside out of love for his friend and out of regard for the purposes of God.  That takes a whole lot more humility and sacrifice than simply placing second.

Then, as if Jonathan’s stepping aside wasn’t grand enough.  He did more.  To me it is the climax of his legacy:  He stood beside.

“You shall be king over Israel (stepping aside), and I shall be next to you (standing beside).”

We can sometimes get ourselves to the point of accepting that a friend holds a more esteemed or desirable place than we do in life, ministry, work, intellect, personality, marriage or parenting.  But that’s about as far as we get.

But in those six little words, Jonathan proves that his love for his friend trumps his personal agenda.  He pledged to be right beside David all the way.  David’s second fiddle.  David’s supporting actor.

Could we do that?

It’s an important question to ask ourselves because the truth is, if we were given the divine pen & paper to write the story of our lives, there are very few of us who wouldn’t write ourselves in as the lead.  But for most of us, that simply won’t be our role.  Will we be content to play the part God has perfectly designed us to play?  Will we joyfully support our friend in her role even if it is larger or more glamourous than our own?   A loving friend doesn’t need the lead.

As we conclude a study like this on extraordinary friendship most of us will arrive at the conclusion that this is humanly impossible.  And we would be right.  But here is where God gets the glory.   It is only a heart yielded fully to him that is wise enough, humble enough and selfless enough to love others more than we love ourselves.  Jonathan wasn’t super human.  He simply committed to live his life for God’s glory and that purpose and beauty seeped into his relationships.  If we will do the same, we too can move intentionally into friendships with wise women.  We can commit ourselves in confident love.  We can eradicate any hint of competition.  We can faithfully endure with friends in their trials.

And we can leave a legacy of love that makes the world stand up and notice.