Speech Matters – When My Words are Rash 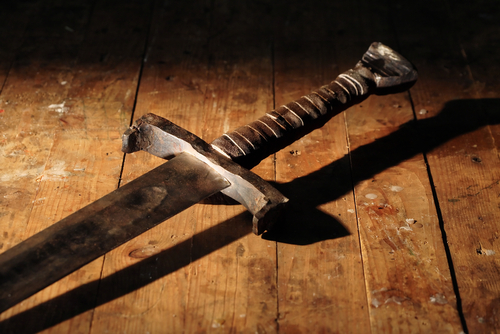 “There is one whose rash words are like sword thrusts, but the tongue of the wise brings healing.”

My husband has long joked that I bear a resemblance to Cinderella.   (This is not going to be as flattering a comparison as it sounds.)  Instead of the hour being midnight, my hour is around 9:00 p.m.  And instead of the magic wearing off, my verbal discretion disappears in a disappointing poof of pixie-dust.  Just as with last week’s problem of too many words, I am well-seasoned in the fight against rash words.

The striking imagery of our verse reminds us that in our tongues, we all innately possess a sharp weapon and what differentiates those who wound from those who heal is the speed and thought with which our words are employed.

Who among us hasn’t at some point, unsheathed that blade and buried it into the heart of another before we realized what was happening?  So quick.   So cutting.  So regrettable.

Especially when, more often than not, those we wound are those we love.

The answer lies not with our words.  Remember from last week that our tongue is not autonomous, but presents only what originates in the heart.  Paul Tripp puts it well when he suggests that instead of saying “Please forgive me – I didn’t mean to say that.” It would be more accurate for us to say, “Please excuse me for saying what I meant.”

That’s because those rash daggers that fly from our mouths are not random, origin-less accidents that should startle us.    What’s shocking really, is that they shock us, because we will never speak a sentiment that wasn’t there in the first place.  That sinful, molten iron that forms these little swords already churns within our hearts (Jer. 17:9) and without proper restraint, comes belching out of us in heated moments.  (Mathew 12:34)

That bubbling, underlying source for our rash words could be:

Anger – I have allowed your actions or words to enrage me and in my warped, little world, my rage authorizes me to spew at you whatever words will most punish you for your crime. (Prov. 29:22)

Impatience – You are preventing me from getting what I want, when I want it.  (James 4:1-2)  Because I live as the practical center of the universe and you are thwarting my desires, I feel completely justified in swiftly venting my irritation.

Pride – I secretly believe I am always right– so much so that I don’t need to check my responses with time or counsel but feel that spouting whatever first comes to mind is completely warranted.

Selfishness – It would take more self-control than I’m willing to muster to think through a better response and the momentary emotional release I relish means more to me than your well-being and God’s desires for my speech. (Proverbs 12:18)

There are more underlying causes to rash speech, I’m sure, but I know I can trace back any of my cutting words to one of these causes.  We have to start here friend, because our only hope is the cross of Jesus Christ.  This mess that churns in our hearts is not something we can clean up on our own and if we implement tips without repentance, we will find ourselves throwing the same verbal daggers year after year.  You may already know that frustration.

So as unpleasant as it is to root down deep into our hearts and figure out what is behind our rash words, it is only in calling those sinful attitudes out for what they are that we see our need for repentance and have enough humility to begin enlisting some powerful allies in the fight against rash speech.

The first ally we can enlist is Silence.

“Even a fool who keeps silent is considered wise; when he closes his lips, he is deemed intelligent.”

As a young bride, Elizabeth George’s classic pink book, A Woman After God’s Own Heart was a key and formative influence.  One of the most helpful things I learned from her was that a great, first response was simply silence.  To say nothing.

That was profound to me.  I hadn’t tried that much at all.  If it popped into my brain, it popped out of my mouth.

For many of us, that alone would be a huge step up.  Because think about it.  Our first responses are rarely our wisest ones, so we might as well put those responses to bed and stop using them altogether.

And that silence all of a sudden lands us in a very controlled situation.  Because think of this:  If we choose to speak now, but at a later point feel it would have been wiser not to speak, our initial decision is irreversible.  Out of our control.  We can’t take it back.

However, if we choose not to speak now but later feel it would be wise to speak, our initial decision is reversible!  We still have the option of addressing the matter at a later point.  How great is that?  How lovely to have our options remain open.

So if you are given to rash words, start with a decisive silence.  Choosing to not say anything initially can land the first neutralizing blow to rash words.  And because our mouths aren’t moving, that actually gives our brains a chance to engage.

And this brings us to our second ally:  Thinking.

“The heart of the righteous ponders how to answer, but the mouth of the wicked pours out evil things.”

If we don’t want to be lumped in with “the wicked” whose mouth gushes awful things, our alternative is to ponder our answers before they leave our lips.  There is an awful lot to think about when it comes to our words, especially if we are to be others-focused in our speech.

We should begin asking:

And when we’ve pondered what is good and right to say, we join up with our third ally in the fight against rash words: Timing.

“To make an apt answer is a joy to a man, and a word in season, how good it is.”

Charles Bridges in his commentary on Proverbs says, “Many a good word is lost by being spoken out of season.”  Even if we’ve pondered our words and they might be good things to say, we have to marry that message with careful timing or we could still wound or neutralize the benefit.  As a high school student in St. Louis, Missouri, I was first introduced to the wisdom of timing by my wise mother.

After school one day, she had mentioned to us that our car required extensive work and it was going to be expensive.  Of course my dad wouldn’t be happy about it, so I waited and watched for mom to drop the bomb.  Mom didn’t say anything when he got home.  We had dinner.  She didn’t say anything then either.  (I was starting to wonder if she was being sneaky or secretive about the matter.)  So while we were clearing the dishes, I quietly asked my mom why she hadn’t told dad yet.  She told me that because my dad works so hard each day, she wanted him to come home, enjoy his dinner and his family, and then unwind for a while.  She said that it would be easier for him to receive that news later on in the evening so she would wait to tell him then.

Instead of showing that kind of regard for others in the timing we choose to use, many of us hold a more selfish perspective on when to speak.  When we explode with the sentiment, “I just have to get this off my chest”, what we are really communicating is: “This is too heavy for me and I don’t want to keep carrying it.  So I’m going to thrust it on you whether or not you are ready for it.”

How much kinder would it be to set our message up for success by choosing timing that is wise and thoughtful!  I’ll admit that there are times when it takes a lot of selflessness and self-control to carry a heavy message for longer than I want to, for a friend, for my hubby or for my sweet teen.  But I can tell you with confidence that the quality and benefit of the reception is well worth the temporary discomfort.

Friend, rash words are not a matter to ignore.  Proverbs 29:20 says “Do you see a man who is hasty in his words?  There is more hope for a fool than for him.”  They will continue to wreak havoc on our lives if we don’t put some controls in place.

Find out where those rash words are coming from so you can confess those attitudes before the God who can forgive and change them.  And then enlist Silence, Thinking and Timing.  They are powerful allies in our fight against rash speech – even after 9:00.

Don’t miss next week’s post as we tackle what may be the largest nemesis for women in our Speech Matters Series:

When Our Words are Harsh.

The entries are flooding in for our verse sign for each share or new subscription.  So keep sharing these posts if you find them helpful.  Or if you and your friends don’t want to miss a post, subscribe to get them sent directly to your inbox.  Thank you for inviting your friends along for this journey!