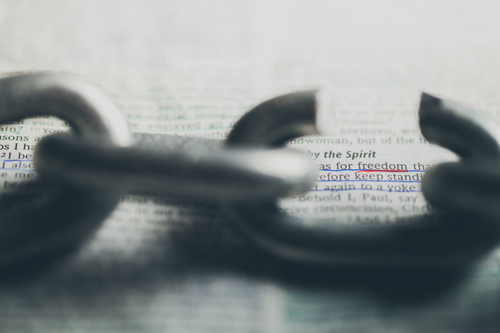 “The righteousness of the upright delivers them, but the treacherous are taken captive by their lust.”

My first grown-up job was as a teller at a credit union.  I learned lots of cool stuff about safes and counterfeits, and only once accidently pushed the panic-call-the-police-we’re-getting-robbed button.

Of all I learned about handling and identifying counterfeits, one thing was sobering:  When a person inadvertently trusted the validity of a counterfeit bill, someone had to pay.  Once, that was a teller who accepted a counterfeit bill earlier in the day and was unable to remember who had deposited it.  He paid for it in the form of a rebuke from the manager and a blemish on his employment record.  Another time, it was a sweet and honest lady who didn’t know where she had received the bill from.  But since we couldn’t accept it for deposit, she had to absorb the loss of fifty dollars.

When counterfeits are trusted, someone pays.

I’ve heard it said that Christianity is restrictive.

When I hear that, I can only laugh.  Of all the false notions out there about a life spent following God, this is one of the biggest misconception of all.  Based on all I have observed and experienced, it couldn’t be further from the truth.  Proverbs 11:6 makes that quite clear:

“The righteousness of the upright delivers them, but the treacherous are taken captive by their lust.”

This verse tells us that for those who are righteous before God (meaning saved through the substitutionary payment for our sin, made by Jesus Christ on the cross), the desire and ability for right living that flows from that condition become our regular rescue.  Far from restrictive, right actions are ongoing agents of liberation.

Restrictive?  I think not.  The God-loving, Bible-obeying, sin-fighting Christian women I know are some of the freest people around.

On the contrary, this bit of biblical wisdom teaches that those of us who offend and transgress God’s laws are the people in bondage.  The freedom we think we are exercising is phony.  Then, deceived by these phony notions of autonomy, we are captured by our lusts – the original word for “lust” carrying with it the idea of naughtiness that leads to ruin, destruction and calamity.  Friend, that’s not freedom.  That’s restrictive.

If you are reading this today as one who is right with God and as a result, living rightly before God, remember and revel in your freedom.  If you read this today as one languishing in the cruel prison your desires have fashioned for you, I plead with you to stop believing the lie.

But the good news is, it doesn’t have to be you anymore.

Thank you for those who shared last week’s Proverbs 31 wrap-up post.  And the winners of the copies of the Prince & The Gift are Amanda S. and Alison T.!